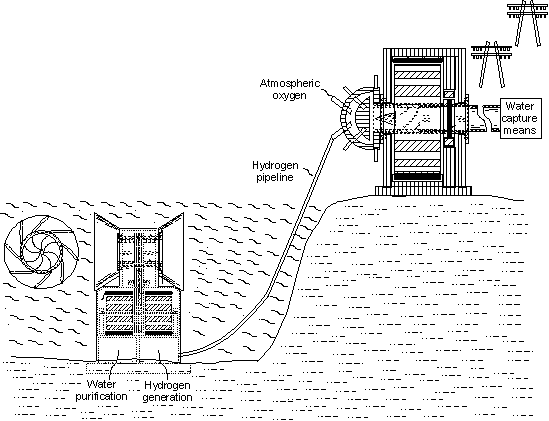 The Other Hydrogen Economy™


The hydrogen economy is most often referenced in conjunction with hydrogen powered automobiles, whose hydrogen is, ironically, most often produced from hydrocarbons. The barriers to this scheme are enormous. What is outlined here, in contrast, is the means to replace the steam generators in conventional electric power plants with hydrogen-fired steam generators. These rely on hydrogen from the facilities and methods described in this web site.

Retiring steam generators that rely on either fossil or nuclear fuel will improve both our environmental and national security.

Hydrogen effectively stores, via the electrolysis of ocean water, the energy that was captured by the turbines and transformed into electricity. If electrolysis requires more electricity than is generated on-site, electricity from the national power grid may be utilized.

Hydrogen, as a store of energy and water, will most likely be the chief export of the facility and will account for the lion's share of the revenues generated. As previously noted, excess oxygen and electricity, derived from the ocean's abundant resources, may also be exported and contribute to the project's overall return on investment.

A national hydrogen pipeline infrastructure, similar in nature to the electric power grid, will provide redundancy, and/or, serve as a primary source of hydrogen to power plants across the country.

Once a national hydrogen pipeline is in place, existing power plants that utilize fossil or nuclear fuels will benefit by converting to Hydrogen-fired Hollow Generators.™ These generators combine atmospheric oxygen and hydrogen to produce heat, thrust, and water vapor. Water recovery apparatus, heat exchangers, and turbines with attached electric generators collectively produce electricity and water for distribution to homes and businesses.

Thanks to the scalable nature of these designs and to the proven technologies they incorporate, renewable sources of water and power may supply new communities in areas previously deemed unsuitable due to a lack of natural resources.